Namaste and greetings everyone!

We are finally back down in Basecamp after our second rotation on the mountain.  We did six nights at Camp II, which is at 21,400′ and had excellent weather while we were up there acclimatizing.  The great thing about Camp II is that you are right up under the Southwest Face and below the Lhotse Face as well, so the views are stunning and you really feel as if you are high on the mountain.  While we were there Neal and I had some time to do some skiing, and we took full advantage.  While both of us are here as guides for our great client Ephi, we of course brought along our skis “just in case”.  Well the mountain gods smiled upon us up there, and we were able to make a descent of the Lhotse Face from just above camp III.  This ski descent has only been accomplished a handful of times before, and the conditions that the mountain gave us were truly incredible.  If I were to rank it in my lifetime resume of ski descents, it would definitely make the top three, joining perhaps the Messner Couloir on Denali and the East Face of the Matterhorn near the top of the list.

Here we go with the images:

This is what the Lhotse Face looked like during our first rotation up the mountain.  The face was basically pure black ice and I never imagined that we would get to ski any part of it.  Camp IV at the South Col is just to the left of the Everest- Lhotse Ridge in the image. 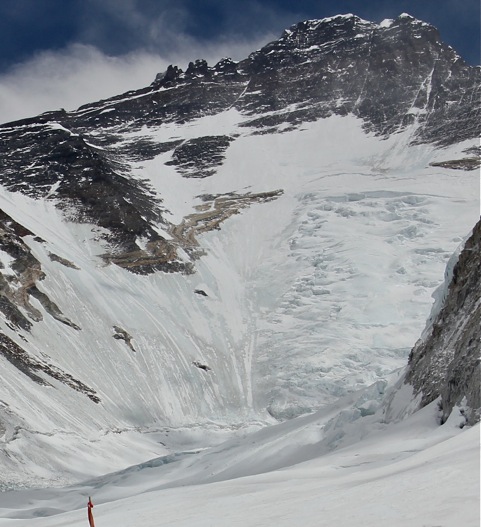 Skinning up the Khumbu Glacier on the approach to Camp II and the Lhotse Face. 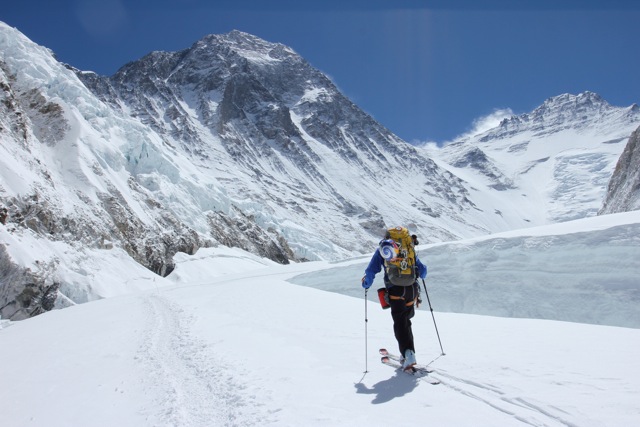 Bill Allen and Ephi Gildor climb the lower Lhotse face towards Camp III early in the morning on the 5th.  You can see how the snow conditions on the face have changed for the better. 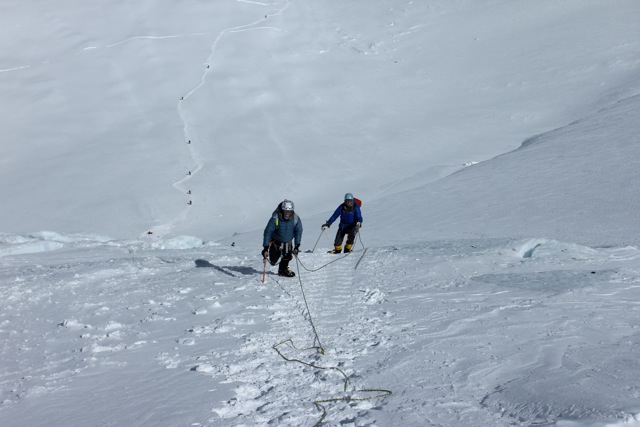 Looking down past Camp III into the Western Cwm, which is the big valley the holds the Khumbu glacier.  Camp II is down in the rocks on the right.  You can see Neal Beidleman climbing up with skis on his back maybe 600 vertical feet below me. 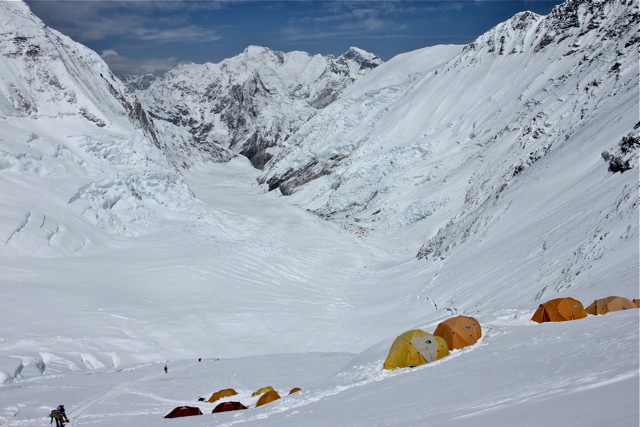 Here I am climbing the fixed lines above Camp III.  The rocky ridge behind me is the Geneva Spur and in the distance above it is the South Col.  There are fixed lines the entire way up the face, which not only makes the climbing easier, but quite a bit safer as well.  As far as gear goes for the climb I’m wearing Garmont Masterlight boots with Black Diamond Neve crampons, a BD couloir harness with BD ascender, My pants and jacket are from my White Spyder Collection- the Eiger Shell Jacket and Sanction Pant.  On my back is a BD Sphinx pack and the new Kastle TX87 skis with Dynafit bindings.  I’m wearing a Smith Maze helmet and Custom Smith I/O turbofan goggles with Sol X dark lenses, and of course there is a Contour GPS camera up there as well. 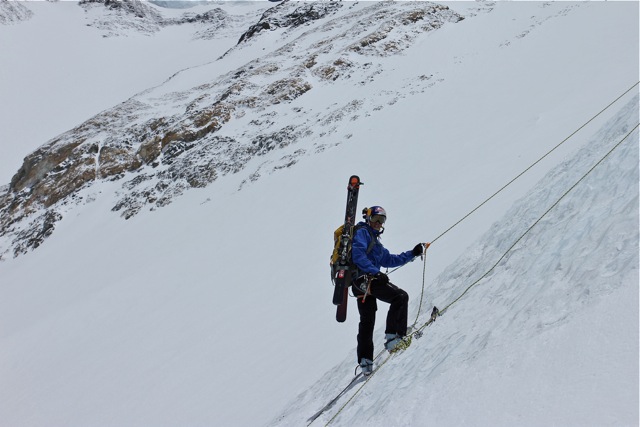 Nearing the top of our climb for the day, Camp III on the Lhotse Face and Everest in the background.  We have about 500 feet to go in this photo. Photo: Neal Beidleman 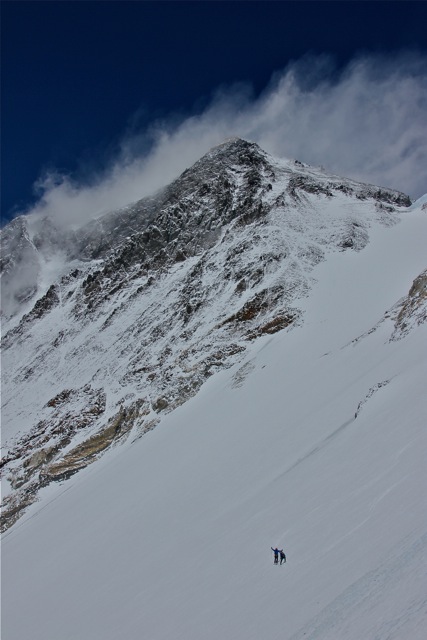 First turns out on the face… oh so sweet… and scary!  Photo: Neal Beidleman 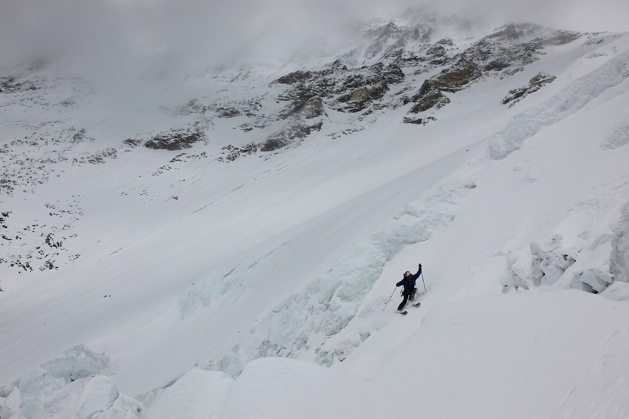 Neal and I are about half way down the face in this photo.  The sense of scale is pretty hard to comprehend.  You really feel like a fly-on-the-wall out here.  I found the skiing to be really enjoyable and with great, stable snow conditions we were able to ski with confidence.  The problem is after twenty turns or so you are about to pass out from oxygen deprivation. We skied the face in stages, stopping to catch our breath, regroup, and admire our surroundings.  At every one of these stops we would look at each other with these “holy shit” grins, half scared and half in disbelief about where we were.  You can see Camp II in the distance below the tongue of the glacier. 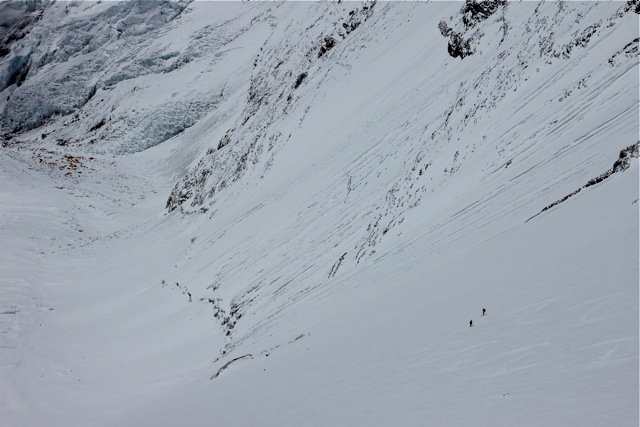 A great view of the face and our tracks in the near-perfect snow.  You can easily see the tents of Camp III on the right in the seracs.  Remember, this entire face is black ice under 8-10 inches of snow.  How it sticks to the face is one of the great mysteries of Mother Nature.  We definitely appreciate it! As for our choice to start skiing at Camp III rather than a bit higher… we were so spent at this point and without oxygen.  Just climbing ten steps was a very serious effort.  Had we been better acclimated we definitely would have chosen to ski a couple of hundred feet higher, at the horizontal rock band, called the “Yellow Band”. 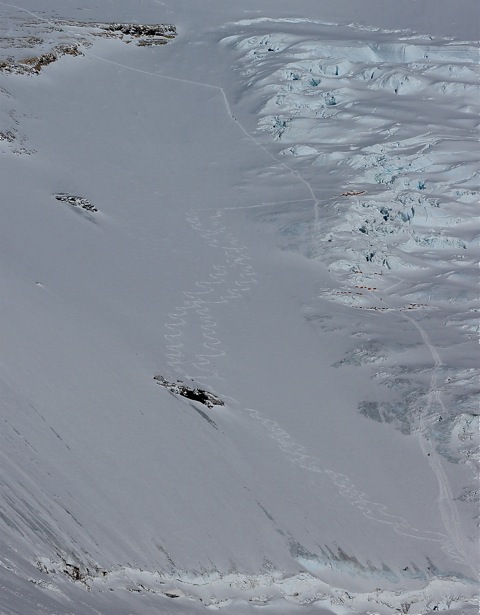 Sherpa Pasang Tendi stoked on his new Kastle skis and Red Bull sponsorship. This kid went from Camp II to the South Col (Camp IV) and back in eleven hours with a full load. 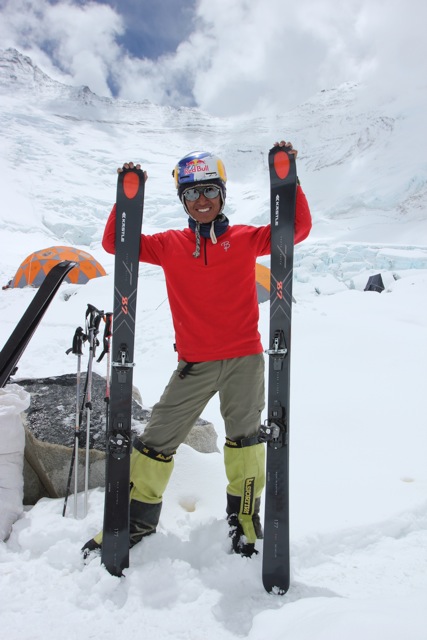 So there we are, what I consider an amazing day of skiing on the world’s highest mountain.  Now it’s time to regroup in basecamp for a day, then head down valley to the village of Dingboche, which is several thousand feet lower than basecamp for rest and recovery before we turn around and come right back up for our summit attempt.  Of course this all depends on the weather but if this go well we should be in position for an attempt at the top between May 17 and 25.  In the meantime I took the opportunity to test out my new TopOut oxygen mask.  If I can’t get to the top with this setup and some Red Bull i’m screwed:-) 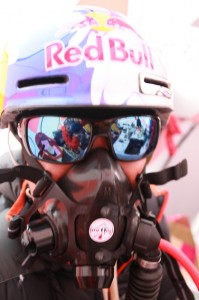 Namaste and thanks for reading.

This site uses Akismet to reduce spam. Learn how your comment data is processed.